In early July, the largest floating dock in the Baltic states was permanently installed at the Western Shipyard owned by BLRT Grupp in Klaipėda port water area and already accepted its first vessel – Minerva – for repairs.

This floating dock for servicing Postpanamax, Panamax and Aframax vessels with a length of 235 meters, a width of 45 meters and a lifting capacity of 33,000 tons was acquired by BLRT Grupp in 2016 from the Adriatic Shipyard Bijela in Montenegro. It has been reconditioned and totally modernized.

“Enormous progress in the field of ship repair has been made and the Group is reaching a completely new level, providing further momentum for us and for the ship owners in repair and modernization of large vessels. Western Shiprepair yard will become the largest ship repair hub and, together with the shipyards in Tallinn and Turku, will enable the Group to compete with the greatest ship repair companies of Western and Northern Europe. As a result, several hundred new jobs will be created. In certain periods, it is necessary to involve a large number of highly qualified specialists of various profiles in that kind of projects. Good climate for this has been ensured in Lithuania: specialists for shipbuilding and ship repair are prepared in higher and vocational educational institutions. There is no quota for foreign employees in Lithuania, thus it’s possible to recruit the highly qualified specialists if necessary. Improving its legislation to attract foreign workers, Lithuania adheres to the same principles as Germany, France, Poland and Finland. This creates favourable conditions for the development of entrepreneurship and for economic support. Unfortunately, due to the challenges faced in connection with recruiting foreign labour in Estonia, we were forced to adjust our development plans and to give up the idea of having a large dock we planned to install in the middle of this year, in Tallinn” said Veronika Ivanovskaja, BLRT Grupp, chairman of the board.

Over the past years, BLRT Grupp has been invested 100 million euros to increase competitiveness of Western Shipyard Group companies and to develop capacities in Klaipėda. Implementation of a multimillion project was possible thanks to cooperation with the Klaipėda State Seaport Authority, which also invested in port infrastructure, ensuring the safe handling of ships up to 300 meters in length. All this measures will significantly enhance the operating conditions for both Western Shipyard Group companies and for other operators active in this port area.

BLRT Grupp is one of the largest industrial holding in the Baltic Sea region. BLRT Grupp incorporates three shipyards – Tallinn Shipyard in Estonia, Western Shiprepair in Lithuania and Turku Repair Yard in Finland, providing comprehensive services in the field of repair and modernization of ships in 24/7 mode. The Group owns two shipbuilding yards – Western Baltija Shipbuilding in Klaipeda and Marketex Marine in Tallinn. 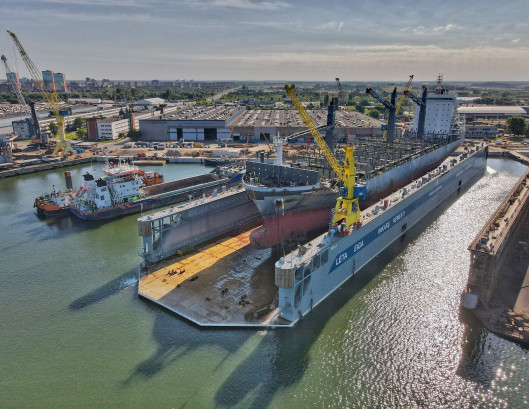