The last two sections of the railway bridge, manufactured by the BLRT Grupp’s subsidiary Marketex Offshore Constructions, have been shipped to Stockholm four days before the contract date. The weight of the structures shipped to the installation site is 1,500 tons, the length is about 220 meters. The unique operation of lading the bridge on the barge has been performed by the Dutch company Sarens.

“Shipped sections of the bridge are already the second part of the items manufactured by our company. Despite the difficulties encountered during the state of emergency, when the borders were closed and air traffic ceased, with support of the Ministry of Foreign Affairs and Estonian Police and Border Guard Board, work on this complex, large infrastructure project was not interrupted, and customer representatives from Sweden, arriving on charter flights, were able to monitor the progress of work directly on site, ”says Ruslan Diduhh, Board  Member, Marketex Offshore Constructions.

“We had no choice but to replace the old bridge, and  we were obliged to do it in a way, that 420,000 people who use one of the busiest railway lines in Sweden daily can continue to move along the section of the Getingmidjan road (Wasp’s waist),” – says Kent Sahlman, Project Manager, Swedish Transport Administration.

This summer, the renovated section of the Getingmidjan railway in the centre of Stockholm should be put into operation. “Before the shipped sections are joined on site, the old part of the railway and pedestrian bridge will be dismantled, after which all technical structures will be installed on the bridge. The work should be completed in eight weeks,” Örjan Persson, Project Manager for Implenia, comments the progress of the work.

In mid-2019, Marketex Offshore Constructions shipped to Stockholm the first three sections of the bridge with an overall weight of 1,750 tons. This autumn the company will have to build and hand over to the customer the pedestrian part of the bridge, the length of which will be 240 meters, and weight – 300 tons. The total weight of the steel structures of the Stockholm bridge will be 3,550 tons.

While the rails on the first three sections of the bridge were installed in Sweden, this time in order to reduce construction time, it was decided to install rails in Tallinn.

The Getingmidjan railway section is connecting link for all trains arriving from the south of the country, making it one of the busiest railway lines in Sweden. Since most of the railways, bridges and tunnels in the centre of ​​Stockholm were built in the 1950s, today they require modernization. 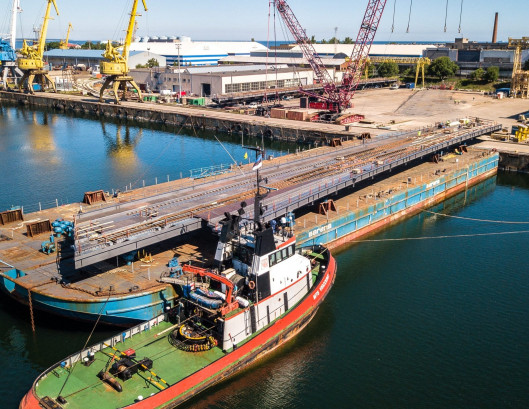