According to Ivar Piirsalu, real estate development director for BLRT Grupp, Noblessner’s advance from an inaccessible industrial area to a human-friendly quarter has been fast and smooth. “This is the first area right at the seafront in Tallinn, where the maritime city’s intention to achieve a maximum openness to the sea creating a public urban space in the coastal area has become a reality. To ensure traffic safety and promote health, pedestrian ways and paths for non- motorized transport modes are separated from car traffic. Renovated landmarked industrial buildings match well with marina and recent developments, “said Piirsalu.

Over the decade Noblessner has hosted world-class music and cultural events. Today, Kai Art Center, Põhjala Tap Room, PROTO Invention Factory, galleries and several of Tallinn’s best restaurants operate here. Noblessner Marina has 130 berths, though the sea promenade has been one of the favourite places for recreational walkers for some time.

Today, the next stage of development is underway, its completion is scheduled for 2025.

Noblessner’s first stage of development has already received several other awards. In 2019, the companies with a major influence on development of Tallinn’s business environment received a reward at the Tallinn Entrepreneurship Awards ceremony, where the first stage of Noblessner quarter development came first in the category of the best real estate development project fostering entrepreneurship or tourism. Another recognition has been given to developers for a well-restored monument, landmarked building of Noblessner Foundry. The City of Tallinn and the National Heritage Board of Estonia also highlighted the restoration of the Kai Art Center’s edifice. 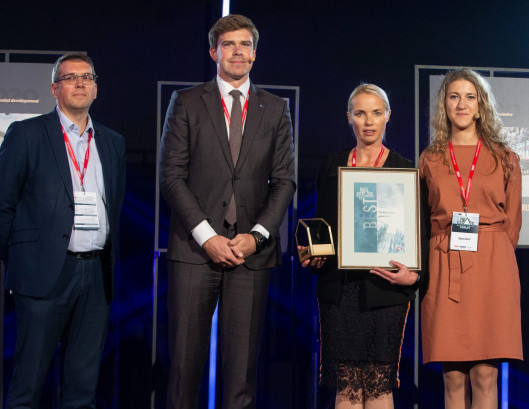